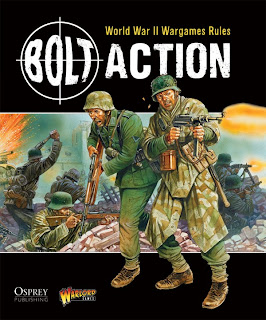 This is the latest thing at the club, following a demo game a few weeks ago that I couldn't take part in for various reasons. It seems to have gone down a storm, with several club players now investing in new or not so new lead. I bought a copy of the rules when they came out, taking advantage of a special offer on the Northstar website but have yet to give them much thought.

However, I have plenty of 28mm figures in the leadpile including Artizan US in Greatcoats and Crusader Late War British, alongside a whiff of Crusader early war French, so no expense would be required to set up a platoon or so. I've pledged myself to stick to painting 'things' not figures this year and, given my track record of unfinished 28mm projects, I really shouldn't get involved but this does look like fun.

I'll have to give it some thought as a potential basing up project for the holidays....?
Posted by Jim Jackaman at 14:51