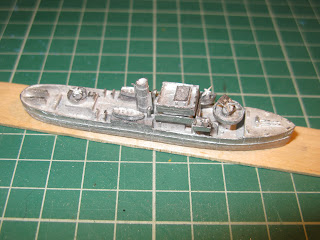 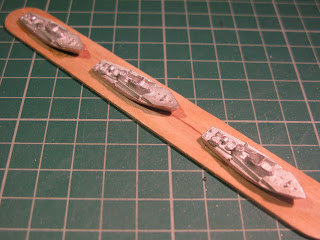 I added an Isles Class escort trawler and three 70' Vosper MTB's to the coastal forces flotilla this evening, although they were a bit rushed. The end result is a couple of lifeboats in the wrong place and a slightly wonky bridge on the trawler but I can fix that another time. The MTB's are an early to mid war option for potential scenarios, in addition to the mid-war Vosper 72' 6'' boats that I already have.

I have a Round Table class trawler to construct as a convoy escort but that's pretty much it for the moment. I have enough to run several different types of scenario, so any further additions to the painting pile would be a bit over the top. Having said that, I've ordered a few 72' HDML's from the Tumbling Dice range,  having been really impressed by the models that I bought at Warfare last year.
Posted by Jim Jackaman at 13:23