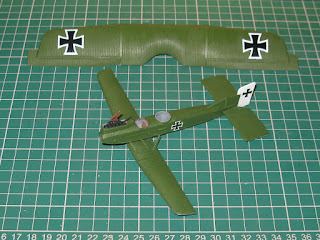 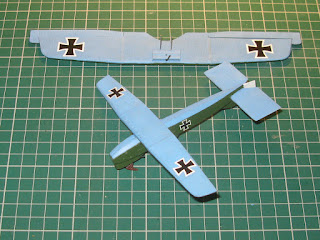 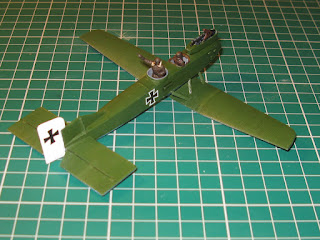 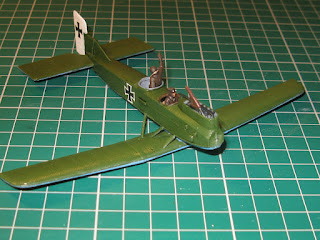 It's been a very busy weekend so I've only scratched the surface compared to what I planned to do, although I will have some time tomorrow to make up the difference. I've added the wing and fuselage decals to the Junkers J/1, with the smaller insignia and markings left off for the moment so they don't get damaged by handling. The corrugated surfaces on the wings mean that the decals don't settle well and require a lot of persuasion with Decal Soft to stay put. I'll spray varnish the whole aircraft once I've finished, so that won't be a problem in the long run.

I've also painted the cockpit surround and touched up the paintwork with a overall wash of GW Athonian Camoshade ink, which is now drying off. The crew figures are also being painted but it's taking ages for the different layers to dry due to the damp weather, so progress has been pretty sluggish. I'm planning to finally assemble the upper wing and struts to the lower wing tomorrow, at which point I'll know if it's actually going to work or if it will all end up in the bin. I have to say that this is dragging a bit now and has taken far longer than I expected, so I hope it will work out in the end!?
Posted by Jim Jackaman at 09:11