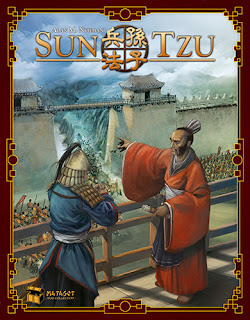 I had to go to Basingstoke today, which I try to avoid at the best of times, but in the process found this board game in The Works along with a few others that I didn't think were as interesting. This game, however, looked really good being a strategy based card and board game complete with two armies of figures in red and blue plastic. The box blurb says:

In 506, Sun Tzu marched up the Hwai River where he was assaulted by Ch'u armies under the command of King Shao. Sun Tzu and his Wu soldiers were outnumbered and King Shao's armies held the high ground. Sun Tzu feigned retreat and tricked King Shao into spreading out his forces, ready to pursue. With the Ch'u scattered, Sun Tzu crushed their forces in piecemeal fashion at the battle of Bai Ju, routing the Ch'u back to their capital of Ying. King Shao fled Ying seeking refuge and asylum across the borders while Sun Tzu remained the master of strategy and tactics. 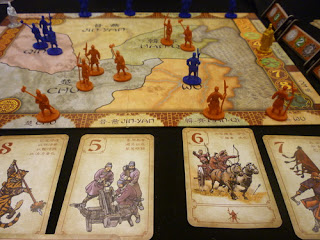 In Sun Tzu, a.k.a. Dynasties, players take on the role of Sun Tzu or King Shao, leading these two opposing armies in an attempt to unify China through the deployment of their armies and forces rather than by brute force. Each turn players play cards to specific provinces, then reveal them individually by province. Armies are added or removed from the province depending on who played the higher valued card or who played a special card. Some cards can only be used once, so playing the card at the correct time is critical to a winning strategy. The game has a feel of "tug-of-war" as the scoring marker starts in the middle of the scoring scale and the players attempt to move the marker to their side of the track. The game ends after nine rounds or if either player is able to move the scoring marker to the last space on his side of the scoring track.