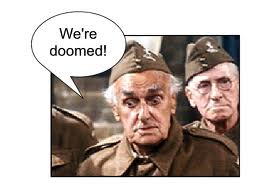 I don't know why it is but everything I've tried to start recently has gone absolutely nowhere. The Mexican Revolution project hit the buffers early on, as the 20mm figures available are OK but not great while the 28mm option is even less inspiring. The 1960's post-colonial plan has also ground to a halt as I try to sift through the Commando Miniatures figures to produce a decent section sized force, leaving the not so great castings to one side.

Finally, my attempts to finish off some extra bits for both AK47 and the Back of Beyond have fallen by the wayside, to be buried under piles of desert themed terrain this half term holiday. This would be par for the course were it not for the fact that my attempts to get an AK47 game up and running at the club seem to be doomed from the start, with two postponements already due to clashes with this, that and the other.

What would Captain Mainwaring do, I wonder?