Bag the Blenheims: After Action Adjustments 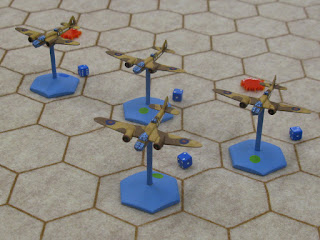 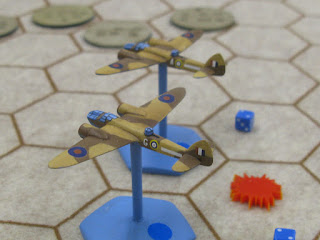 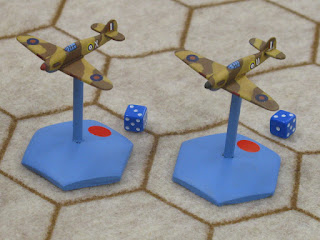 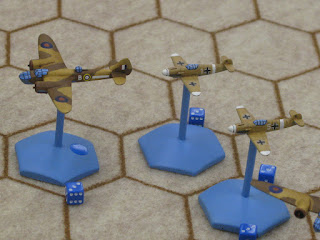 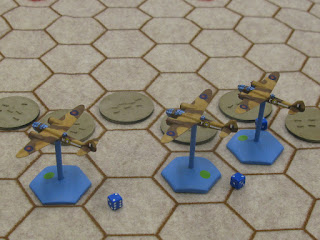 The Buchanan's Party scenario needs a little tweaking for a number of reasons but, on the whole, seemed to work quite well. In the end, the Luftwaffe pilots of Stab III.JG27 shot down two No229 Squadron Hurricanes of Yellow Section, one in a catastrophic mid-air explosion and the other in a gradual slow glide down to earth to crash land in the desert. They didn't manage to shoot down any of the No14 Squadron Blenheims, however, which succeeded in dropping three sticks of bomb on the convoy but only destroyed one of the target markers in the process.

In addition, one of the Bf109 F-4's suffered a gun jam and was effectively out of the game by Turn Three. The Victory Points worked out at four for the Luftwaffe but only one for the RAF, so a clear Axis victory. We did run out of time though, so I suspect that several of the bombers would have exited the table in Turn Six to claim additional VP's. The feedback from the players was generally positive but I felt that the game dragged toward the end and that the RAF had a rough deal, not due to the scenario set up but down to an unlucky turn of the cards and some dodgy dice rolls.

There are a few tweaks that I now need to make.

2. The bombers need to have a much shorter bomb run, not the ten hexes in a straight line stated in the rules. I reckon on five being a good number as it's the base speed of a loaded Blenheim, so would seem sensible. I can justify this as a result of No14 Squadron's extensive combat experience.

3. The bombers need to be directed to approach the target down the centre length of the table. In the game, the No14 Squadron players decided to drive down the northern long edge of the table, to avoid the enemy fighters, only to pile up in the north eastern corner. They managed to pull a tight turn and fly back across the convoy but at one point it looked like they would have to fly off and back on again!

4. The card deck was a bit too big. I think I'll leave out the Top Ace card for the Blenheims and the aforementioned extra fire card for the Luftwaffe. I'll keep the character cards though, especially Wing Commander Buchanan, so that the bombers can still move far enough yet not too fast to outstrip everything else.

5. I may bring both the III./JG27 and No229 Squadron fighters on in the first turn and shift the bombers to Turn Two, in order to get the action underway as soon as the bombers arrive on the scene. The Luftwaffe 'bogeys' worked well and tied down the Hurricanes by latching onto the tail of Yellow Section but this meant the RAF pilots were unable to do much in the way of firing before they were blown to bits.

I think these minor tweaks will help to balance out the scenario and, at the same time, help to speed up the game play too.