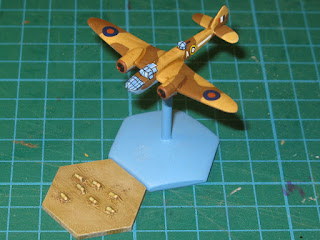 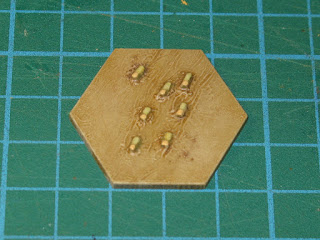 I need twelve hex sized target markers for the Axis M/T convoy that will be bombed in the scenario, so I set about scratch building a prototype this evening. I originally planned to use 1/300th scale Heroics and Ros vehicles for each marker, following the approach that I used for the Eastern Front games I've played. However, as the Operation Crusader scenario has the RAF level bombing from 3000 feet rather than a couple of hundred, this wouldn't really work. 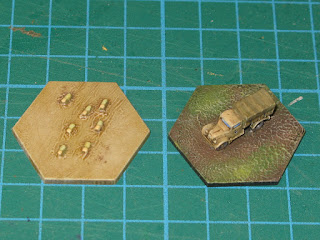 Instead, I decided to chop up some sections of plastic rod, superglued them to a lasercut mdf hex base then smothered the whole lot in acrylic paste. When this had dried I base coated it in Halfords Ultra Matt Khaki, gave it a wash and then set about picking out the vehicles with brighter, contrasting shades to represent motor transport vehicles. I think the end result looks alright and will do the job, even if it's not exactly scale modelling? I now need to make another eleven of the things!
Posted by Jim Jackaman at 16:32