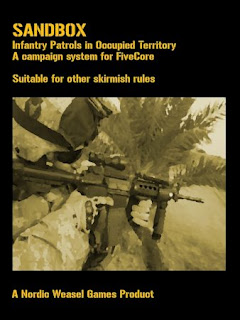 I've been meaning to begin some sort of 15mm squad to platoon level post-colonial project this year, using my stash of spare AK47 figures and as much of my existing terrain as possible, with a few extra bits added here and there. I have some Peter Pig professionals to use as British, some FFL and some militia figures for the 'bad guys', so there's no shortage of possible scenarios, from Aden and the Radfan, to Borneo and Belize and even as far as an 'imagi-nation' somewhere in Africa.

To tie this all together I've decided to use the FiveCore system as a starting point, although Rory Crabb's Fireteam rules also look eminently suitable. Anyway, to nudge myself a little further down the road of actually starting this project, I have downloaded the Sand Box campaign supplement for solo infantry patrols in 'hot' places, in more than one sense of the word. It looks like a neat little system, so I will bend it to fit my existing plans for post-colonial small wars.
Posted by Jim Jackaman at 14:26