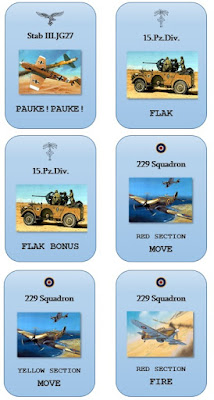 I've had a busy day doing all sort of things, so didn't get much done in the way of wargaming, apart from another six cards for the North Africa Bag the Hun scenario. These include a special card that I've added to the original mix in order to balance out the frequency of card play. I've called it the Pauke! Pauke! card, which translates as Kettledrums! Kettledrums!, or in Luftwaffe speak 'Tally Ho!. It also supposedly translates as Boom! Boom!, although that's a bit too Basil Brush to be sensible.

It will give the Stab III.JG27 players an extra burst of fire and will be included in the pack to reflect the dogfighting experience of the pilots and their better fire discipline. I thought this would give them a better chance of doing something each turn while the RAF players cycle through their numerous cards and would give the Luftwaffe a bit more of an edge against their numerically superior adversaries. If it skews the play too much, I can always leave it out as I've made it optional.
Posted by Jim Jackaman at 12:58