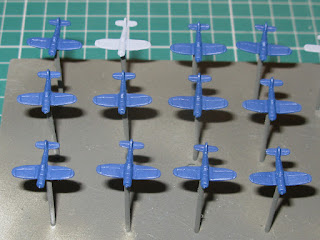 I've started on the aircraft for the FAH today, with an overall blue base coat on the Honduran F4U-4 and F4U-5N Corsairs. This raised an interesting question about exactly which shade of blue to use, as I have seen several alternative colours in photographs, paintings and profiles? I didn't want to use the gloss dark blue that I applied to the MiG Alley USN and USMC aircraft, as this is way to shiny for some battered, second hand 'one not so careful owner' flying machines. 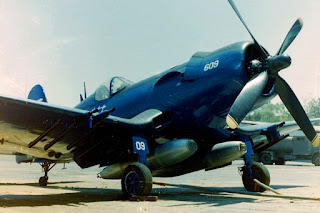 In the end I settled on a very old pot of Citadel Night World Blue, from the long lost days when they had only three shades of blue in the entire Citadel Paint series. I think this looks spot on and will look even better with a wash and a drybrush. I have left one Corsair in matt grey undercoat, as one of the F4U-4's was left in an off white, light grey scheme similar to that applied to the AT-6 and T-28A's, so I'll paint this 'odd one out' when I tackle the rest of the Honduran Air Force.
Posted by Jim Jackaman at 19:39