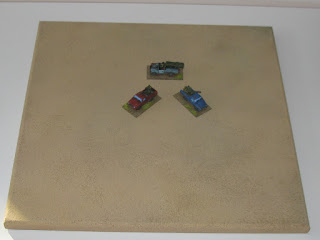 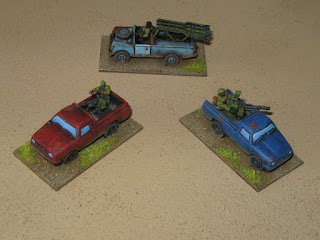 I was pleased with my DIY gladiatorial arena that I boshed together using an old cork pinboard, some tester pots and some cheap emulsion paint, so I thought I'd have a go at a similar 40cm x 40cm square terrain board with a desert theme for 15mm modern and post colonial skirmish games. This time I used my £4.99 2.5 litre tin of Homebase Cashmere emulsion paint as a basecoat, followed by a random spray pattern of Halfords Ultra Matt Khaki for some variation, with a final light brush splodge from a tester pot of Laura Ashley Old Gold. The board was being thrown out by my daughter so that was a freebie, although it originally cost £7.99 in WHSmiths, making the total cost only a few pence. 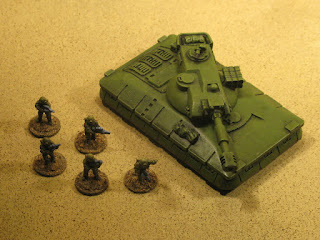 The overall effect quite subtle and difficult to see in the photos but looks good enough and is accentuated by the cork board texture, which has a nice baked earth effect. I've plonked some AK47 vehicles on top to see what it looks like but I won't be using these with the board, as they are based in a darker shade. Instead, I'll be painting some 15mm modern infantry, probably French and Insurgents for an imaginations skirmish project, as well as some 15mm post-colonial British troops for an Aden inspired skirmish project, although not until I've cleared the current workbench back log. It's a bit small for 15mm and 10mm might be a better way to go but I'm already set up for 15mm, so that's the obvious choice. 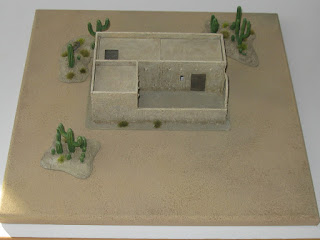 I could, at a push, also use this board for 28mm skirmish gaming as it is not far off the terrain that I've made for A Fistful of Lead: Reloaded and the Back of Beyond. In fact, as you can see in the photos, this terrain is a better match than my AK47 stuff. The board is a bit small for 28mm but would be fine for gunfights and especially for quick pick up games, where I don't need to unpack and set up loads of terrain on a big table. I'm quite pleased with this board and will be making some hills, tracks and gullies out of cork tile to place on top, as well as some of the 15mm laser cut desert buildings that I've been collecting over the last year or so.

I might even get another one from WHSmiths and make a jungle board for Vietnam?
Posted by Jim Jackaman at 09:57