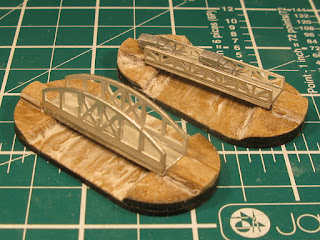 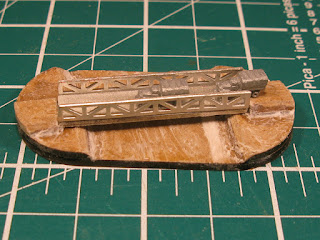 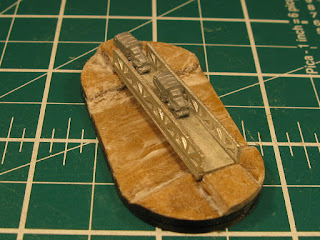 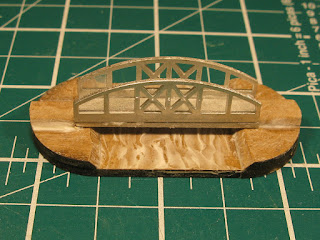 I've been rushed off my feet today so only got down to the workbench this evening, with about an hour or so in which to do something constructive. I added the basecoat to the FAH Trojans, Texans and Cessna light aircraft, then looked around for something that I could do while they were drying. I remembered that I had the 1/1000th scale bridges that I had ordered from Brigade Models a couple of weeks ago, so I decided to make a couple of extra ground targets for the Wings at War Football War project. 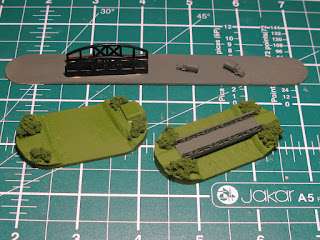 These are based on laser cut oval shaped templates as the standard 30mm round bases wouldn't be big enough, although the ends of the oval bases are the same diameter so that they don't look out of place. I added some river banks from 30mm bases cut in half and some road embankments from those little widgets left over from laser cut kits, both shaved down and covered in a layer of acrylic paste to seal them and add ground texture. I've sprayed them with Humbrol Grass Green, added the foliage and then re-sprayed them to seal it all in. 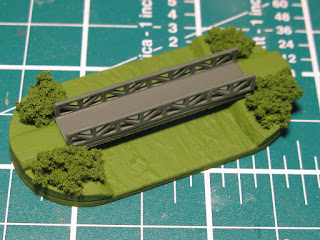 I'll finish these tomorrow morning, which shouldn't take very long once I've decided what shade to paint the large girder bridge (?) and the river flowing underneath. I'm also going to add a couple of 1/600th scale Oddzial Ozmy trucks for visual effect, as they make good targets and scale well with the Bailey Bridge in particular. I have two more of the Brigade Models bridges left over but I'm saving them for MiG Alley, where they will used as ground targets for bombing raids by the UN forces. I may get another set of these as they are neat little models and not that expensive either.
Posted by Jim Jackaman at 20:16