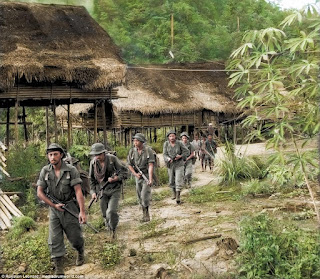 There's a really good article by Steve Blease in this month's Wargames Illustrated on the Malayan Emergency. I'd thought about skirmish wargaming this way back in 2010 but then switched focus to the Indonesian Confrontation and Aden. I originally planned to use the Commando Miniatures 28mm range for both of these but, having ordered a few sample figures, I was disappointed by the chunky sculpting so moved on to Peter Pig in 15mm. This 15mm platoon level post colonial project is still definitely in the pipeline, once I've finally decided between the desert and the jungle! 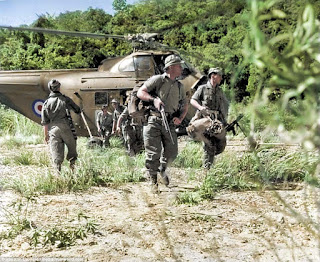 However, the WI article got me thinking again about Malaya in 28mm as another 'pre-baked' project, in other words a scheme that I could pull off without a massive investment of time or treasure.  This time, it is the terrain that I have already assembled that would make this relatively quick and cheap to wrap up. I made a jungle outpost for my now abandoned WW2 28mm Japanese army, which has been sitting in a plastic box doing nothing for years. This would be the focus for some jungle terrain scratchbuilding using the stash of plastic aquarium plants that I've stockpiled for Darkest Africa and other jungle themed project. 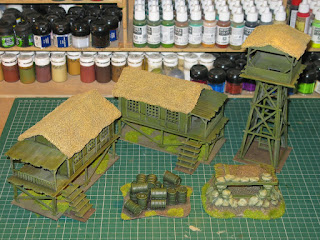 All I'd need to do then is get two section sized units of the Brittania Miniatures 28mm British and CT figures, perhaps twenty or so figures in total at a cost of less than thirty quid. These look like simple figures to paint and wouldn't take long to complete, ready for some squad level skirmish gaming. I already have a 28mm Saracen APC kit, which  I bought to use with the Commando Miniatures figures, so that's an added bonus. The only thing I'd need to decide upon is a suitable set of rules, perhaps Danger Close, Force on Force or Fivecore?


Again, just another random train of thought but worth exploring nonetheless and definitely better than starting something new, shiny or expensive!
Posted by Jim Jackaman at 11:04