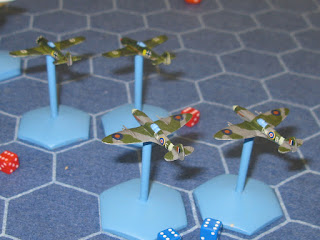 I got back from Brittany last night and have already been sorting through the models for the Lard Day Bag the Hun multiplayer game, so that I can run it again in a couple of weeks at the club. The play test is scheduled for the 15th and it will help me to iron out any wrinkles before the actual Lard Day game. I have six players signed up so it will be useful to see how the smaller numbers affect gameplay, compared to the nine players last time, which was too many.


The plan is to try out some new helpsheets for manoeuvres, turn card actions and firing, which I'm going to digitally cut and paste from the rules, to use alongside the existing Quick Reference Sheet. I also want to redesign the Record Sheets for the pilot and aircraft pairs, as the ones in the rules have some redundant features and could be easier to use. I'm going to aim to get all of this done over the next week or so. 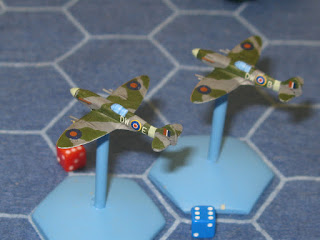 I am now debating whether or not I need to paint a few more 1/285th scale models for the game, specifically for the RAF. At the moment I only have a pair each of Spitfire XIV's, Tempest V's and Meteors, which leaves the players with a limited choice. I can see the RAF being a popular option, leaving me a bit high and dry if I'm not adequately prepared. I have no shortage of USAAF fighters but you never know?

The best bet would be to paint a section of Tempests, as I have the models already, but I'm not sure if this isn't an unnecessary diversion from the painting that I should be doing for the 1943 game? I have to convert and base eight more Fw-190's for this, then paint a minimum of twenty planes for the scenario, not to mention an E boat and various markers, so the sooner I start the better!
Posted by Jim Jackaman at 10:36