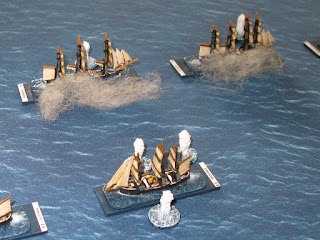 I've offered to run a game of Broadside and Ram in January at the club, which has picked up some interest, so I'll be planning this out over the holidays. I think I can squeeze in a couple of scenarios to an evening, as it's a fast play set of rules, so will do a replay of the Battle of La Baie d'Audierne, which I soloed a few months ago:

This is ideal as it involves a large number of ships and has a few challenges thrown in for both the French and the British. I'll also have a go at summarising the rules onto a double sided A4 sheet, incorporating some of the tweaks that I've added for more tactical level scenarios. This shouldn't be too difficult and avoid the need to explain the rules more than once or twice during the game.
Posted by Jim Jackaman at 02:41