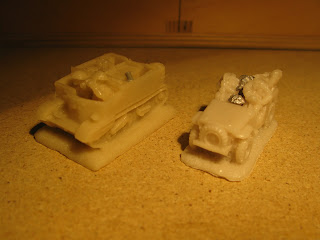 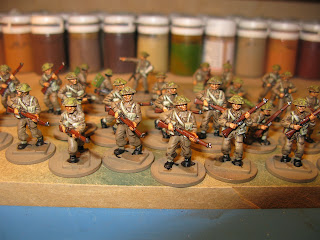 We got back home early today so I snatched a couple of hours in the garage to make up for time lost over the last few days. I've painted all the boots, metal bits and hair with a 50:50 mix of GW Black and Black Ink, followed by a drybrush of GW Boltgun Metal on the rifles and automatic weapons.
I also repainted the mortar and PIAT ammunition canisters in GW Gretchin Green to tone them down a bit. I finished off with a bit of tidying up ready for the insignia and divisional patch painting tomorrow. They definately won't win any prizes but they'll do as rank and file.
I also had a surprise delivery in the post, consisting of a lost parcel of Raventhorpe resin vehicles that I ordered back in December. They went to the wrong address but have now turned up. Anyway, the key items are an FAO carrier and a jeep for the 5th DCLI reconnaissance platoon. Very handy!
When I've finished off the infantry I'm going to tackle the AFV's and carriers as a bit of a change, leaving the infantry support weapons and crews to the end, whenever that turns out to be. The recce jeep and FAO carrier will be added to the vehicle park and painted up as and when.
Posted by Jim Jackaman at 13:12