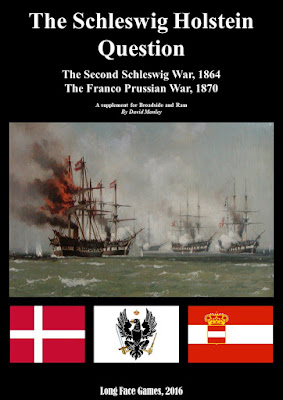 I was really pleased to see that David Manley has produced a supplement for his fleet level ironclad rules Broadside and Ram for the 1864 Second Schleswig War. This is an on-going project of mine in 1/2400th scale using the Tumbling Dice Victorian naval range. I was planning to use Iron and Fire for this project but, as these rules are designed specifically for fast play fleet scale actions, they will be perfect for the Battle of Rugen and for the Battle of Heligoland. The content of the supplement is very much based on the material in the old Iron and Fire supplement, which I already have, but with new ship data for the Broadside and Ram system.

I was waiting to see if A&A Games Engineering were going to publish their sail and steam version of Grand Fleet Actions in the Age of Sail, which has been on their list of things to do for a while, but I will now use Broadside and Ram instead. I have all the models assembled for both the Danish and Prussian flotillas at Rugen, so I just need to get them painted to be ready for a game. I also have some merchants for blockade running and the relevant Austrian, Danish and Prussian warships for Heligoland, using proxy models from the Tumbling Dice British and French range. The 1864 naval war would make an excellent mini-campaign but I would need to work out a way to run it, perhaps using the Lissa Campaign in the rules as a basis for a series of linked games.

This is an excellent addition to the rules library and very good value as well. You can download the Broadside and Ram rules and the additional supplements from the Wargame Vault website. A big thank you to David for publishing the rules and the supplement, which I am looking forward to trying out when I get back from the holidays. In the meantime, I'm going to get some thinking done on the mini-campaign front, with a thorough read through of both the campaign material for Lissa and my reference stuff for the naval campaign in the Baltic in 1864. There are some great 'what if?' possibilities for a start!