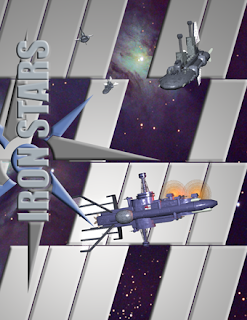 Colin of the Down Amongst the Lead Men blog has invited me to have a go with Iron Stars, the VSF space warfare game published by Majestic 12. When this set of rules and miniatures from Brigade Models was first released, a fellow club player tried to get me to take the plunge but my will power was too strong.


Now, I quite like the idea of a small flotilla of British spaceships, especially as a new version of Iron Stars is soon to be published, which means that there may well be some new ships on the horizon from Brigade Models. Colin already has Russians and Austrians, so the British Empire seems like an obvious choice.


At the moment it looks as though the Iron Stars range has been sidelined, with the British battleship out of production leaving only the light cruisers and destroyers. I think I will be able to get away with these as a small flotilla, however, without the need for anything heavier? There's a nice little flotilla set to start me off too.
Posted by Jim Jackaman at 02:34