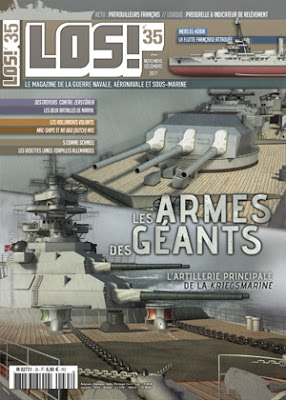 I've been raiding the newsagent again but the haul of wargame related swag hasn't been so good this time round. I did find a couple of decent magazines, however, so it wasn't a total washout. As well as the usual copy of Vae Victis, which has a nice after action report of a Bolt Action! French Indochina game, I picked up the latest edition of Los!


This has a great article on S-Boat development and camouflage, as well as a cracking article on the destroyer action at Narvik. There's also a detailed overview of Mers el Kebir and a feature on the Dutch Fleet Air Arm contribution to the Battle of the Atlantic, which I had never heard about before.


It's a very interesting read and there really is loads of stuff for naval and air wargaming packed in this edition. The S-Boat stuff is great for my coastal warfare project, while the Mers el Kebir and Narvik articles are spot on for Victory at Sea or Naval Thunder. I can even pinch some scenario ideas for Bag the Hun using Dutch Swordfish against U Boats!
Posted by Jim Jackaman at 10:50