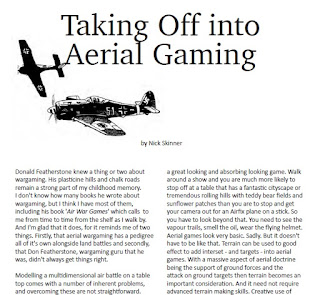 I have managed to survive the marathon blow out that a five hour Christmas lunch represents here in Brittany, but only just. I won't go into the gory gastronomic details* but there were six courses and it lasted from twelve until about half past six, if you include the drinkies at the beginning and the chocolates at the end. I kid you not. It will probably take about forty eight hours for me to recover, if not an entire fortnight, even though I was pacing myself and avoided the mother in laws efforts to belay me with extra portions.

Anyway, I've been trying to digest not only the food but also the contents of the latest TFL Special, with a particular focus on the Bag the Hun articles which are my 'thing' more than some of the other features. There's an interesting article by Nick Skinner on aerial gaming and the potential within the Bag the Hun system for various theatres of war to be recreated. Nothing spectacular but I really enjoyed his take on the origins of air wargaming and the role of roleplaying in Bag the Hun itself. There's a couple of good scenarios too, one for North Africa and one for the Russian Front, both of which I will have a look at as potential club games.

Personally, I thought Bag the Hun had dropped off the TFL radar recently but clearly they are trying to give it a bit of a re-boot? Anyway, as always there's a load of additional stuff to browse through so this Xmas Special comes highly recommended, even if air wargaming isn't your cup of tea! Got to go now as the mother in law has just announced that it's supper time.....