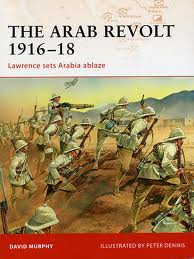 I've nearly finished Road of Bones, which has been a real page turner and very interesting, so I've been looking around for my next bit of historical background reading. As I've just ordered a small selection of the Artizan WW1 Arabs, I thought I'd have a dig around for some inspirational stuff and ordered a copy of the Osprey Campaign series book on the Arab Revolt from Amazon, using a birthday voucher that I was given back in January. It looks like a worthwhile but conveniently quick read and should give me some ideas that I can use with Through the Mud and the Blood, assuming that I get round to it sooner rather than later.
Posted by Jim Jackaman at 17:32