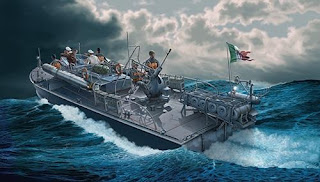 I got back the results of  my turn one orders for the club campaign today and things are looking interesting for my Italian commander. Without giving too much away, it looks like my special forces are poised to pull off a daring commando raid, which will give me some much needed extra diplomatic pulling power. If things go BOOM! in the expected spectacular fashion, I should be well on my way to some extra gongs from Il Duce.

I've also gathered some valuable intelligence on enemy naval dispositions and have positioned my coastal forces to intercept them in subsequent turns, if everything goes according to my best laid plans. Finally, I've reinforced my authority over the Italian commander across the way with an offensive flying display and smoozed the other Axis commanders with fine wine, parma ham and gorgonzola.

What could possibly go wrong?
Posted by Jim Jackaman at 13:53