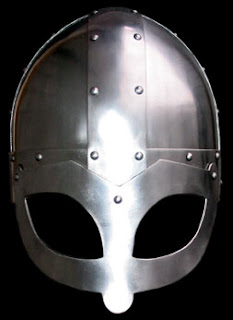 I made a futile attempt to get hold of some Anglo Danish SAGA dice this afternoon but found that they'd sold out. However, in what appeared to be a good omen of some sort, the Viking dice set had just been re-stocked by Northstar, so I've now ordered a set. This means that the SAGA project will have a definitely scandinavian focus, with the Normans on hold for a second warband at a later date.

With that in mind, I dug out the box of Foundry Vikings that I originally aquired at some point in the last century for WAB Shieldwall. I've selected a six point warband with some room for adaptation just in case the format needs adjusting. I haven't played the rules yet, so may have overcooked things a bit but I have chosen a nice selection of figures nonetheless.

I couldn't be bothered with painting twelve levy archers so, instead, I have three hearthguard units of four hersir figures and a berseker unit to make things a bit scary. I also have two eight figure warrior units made up of spear armed but unarmoured bondi. To complete the Norse warband I have a jarl figure, who may well end up with a suitably bizarre but fitting title.