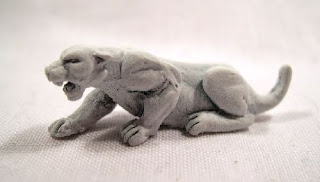 As I only have one mangy lion for the gladiatorial games, I thought I'd add a couple more beasties to the managerie for use in the arena. I really wanted some wild boars but the Foundry ones cost and arm and a leg due to postage, so I've gone for a rather scary bear and a slightly less intimidating puma, the former from Trent Miniatures and the latter from North Star.

I was reading about the gladiatior burials in York, as part of my project research, and was interested to read that one of the skeletons had bite marks from either a lion or a bear. I was a bit dubious about the lion theory but a bear seems entirely plausible, given the fact that they were wandering around at the time. The Puma was just too nice a sculpt to resist!
Posted by Jim Jackaman at 13:42