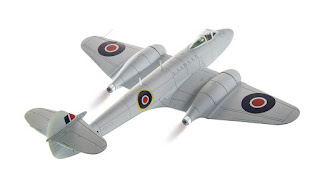 I have about half a dozen players signed up for a Bag the Hun 2 multiplayer game at the club, with a date in a couple of weeks looking good, although I have yet to book it in to the club website database thingy. I have been thinking about how to run this game and have come up with a cunning plan. This  involves recycling a successful game I ran a few years ago with a few additional twists to make it a bit different.

This will be a late war game set in 1945, with each player being allocated at random a pair of fighter aircraft and pilots, the objective being to shoot down as many of the enemy as possible. Half the players will be flying for the Luftwaffe, while the other half will be either RAF, USAAF or VVS. All will fly on as bogeys in Turn 1 from different directions and at random altitudes, much akin to the reinforcement entry mechanism in AK47.

There will be a general 'free for all' dogfight with a set time limit of turns, after which a 'Bingo' / 'No Fuel to Duel' card will be slipped into the pack, on which all of the players will have to roll to stay on or to head back via their entry point. If a player is shot down early in the game, I will have some spare aircraft and cards that can be used after a decent interval to allow them to fly back into action, possibly on the opposing side if required.

The aircraft involved will include the P51D, Spitfire XIV, Tempest V and La-5/7 for the good guys, with the Fw190A8, Fw190D9, Me262 and Bf-109K for the baddies. I'm also going to paint four 616 Squadron Gloster Meteor F MkIII's for the game, using the old Raiden Miniatures model, even though they never engaged in air to air combat. If you remember the old Airfix model of the Gloster Meteor, you will have some idea of what they looked like in 1945. 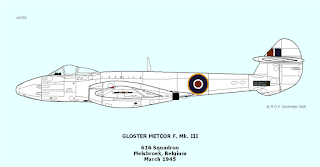 After some close shaves they were painted overall white to prevent trigger happy AA gunners and USAAF pilots from assuming they were Me262's, so the paint work will be very straightforward. On the other hand, it does mean that I will have to divert my last remaining flight stands from the III/JG2 Fw190A3 project for the moment, leaving them high and dry until I can order some more or get some from Magister Militum at Colours on Saturday.