Bag the Hun Me163 Komets 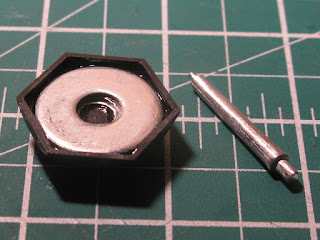 I went off on a tangent this morning and based up two Scotia Collectair Me163 Komet rocket interceptors, which I had in the bag of stuff that I bought on the Bring and Buy at Colours a couple of years ago. They are so tiddly that I decided to base them on plastic flight stands, weighted down with some washers glued into the base, with white metal posts from GZG for extra strength.

The plastic posts always end up snapping off eventually, especially with heavier or larger models like Aeronef, so the metal ones are a good idea. I may well get some more of the Komets, as they are really cheap at only 80p each and are pretty nifty in Bag the Hun terms, with a speed of 11, a manoeuvre rating of 3 and a respectable fire factor of 7, which should put the wind up the B-17 gunners to say the least.
Posted by Jim Jackaman at 07:09