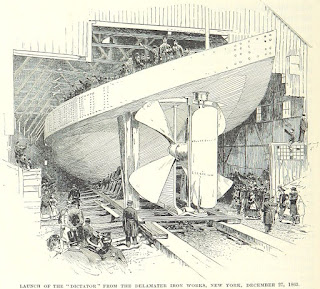 I ummed and ahhed about this for a while but have decided to put together a small squadron of US ocean going monitors c1870 as opposition for my Royal Navy ironclads. The Tumbling Dice range has a number of useful models for this but, as I previously mentioned, they are less than accurate in terms of shape and size. So, my plan is to use the models as they are if they turn out to be okay but to re-purpose the bases for scratch built hulls if they turn out to be a bit dodgy.

I've ordered the USS Roanoke, (ASV50) two USS Dictator and two USS Kalamazoo packs (ASV54), so that I can put together a decent sized squadron of ocean going, rather than coastal monitors. I could also have used the USS Monadnock pack (ASV52), as there were four of them in service c1870, but I know that the models are a bit wonky, so decided to leave them out. This means I will have a squadron of the following monitors, some of which were in commission at the time and some of which might have been if they hadn't already been mothballed or scrapped:

I will probably also add a couple of conventional steam screw warships to this mix too, if I end up going ahead with it, as well as two more of the Kalamazoo class monitors if I can use the castings as they are and don't have to scratch build anything. The idea will be to use them for a 'What If?' war between the United States and Great Britain at some point in the 1870's but they might also be opposition for the French, I'll just have to think of a credible reason why?
Posted by Jim Jackaman at 02:09