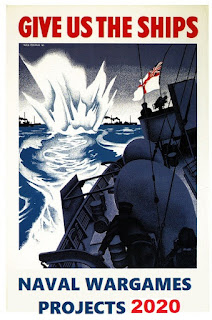 
As promised, here are my plans for 2020 in no particular order, with a continuation of my nautical wargaming projects under the overall mission objective to Give Us The Ships!

1. 1/2400th scale Ironclads - I have nearly completed my French and British Victorian ironclad project but have a few models left to paint, so this year I'll be concentrating on the Prussian, Danish and Austrian ships for the 1864 Second Schleswig War. I also want to try out some 1/2400th scale rigging, if I can summon up the courage? If I can squeeze it in I'd like to get at least a couple of my 1/600th ACW ironclads assembled and painted too.

2. 1/2400th scale Age of Sail - I've assembled and based a French Napoleonic fleet in 2019, so this year I'm planning to get it painted up, followed by a matching British fleet to be assembled over the summer holidays. I also have a plan to paint up some 1/2400th scale Royalist and Commonwealth ships for the 1660's, if I can squeeze that project in somewhere along the way.

3. 1/2400th scale Pre-Dreadnoughts - these have been hanging about for quite a while, so I plan to get one fleet assembled, based and painted up at some point, with plenty to choose from but probably starting with the French. These will be used for more counterfactual, 'What If?' Anglo-French shenanigans!

4. 1/3000th scale WWII - I rebased my early war French fleet last year, so I have now breathed new life into this project, with the aim being to base and paint a matching fleet as the opposition, the obvious choice being the Italians but with potential British, German and even Japanese options also on the table. I may even squeeze in a small Cold War project in the same scale?

5. 1/300th Cruel Seas - I've been fiddling about with this project but didn't get very far in 2019, so it is time to crack on and build a flotilla of coastal craft for club gaming and solo gaming at home. I have been working on some Free French MTB's but will now be concentrating on my initial efforts to paint up a Kriegsmarine force based around the 5th S-Boote flotilla c1943-44.
6. More Naval Terrain - suitable for smaller scale naval gaming but flexible enough to be used for larger scales too. I'd like to add some islands to the Mediterranean coastal pieces that I scratch built last year but also branch out to make some coastal terrain for the English Channel or Baltic, the latter also useable for the Russo- Japanese War or even Norway in WWII.

I also have some other non-nautical projects that I want to do, primarily the 1/285th scale aircraft for the Lard Day game in March. I will squeeze in some more 1/600th scale aircraft for Wings at War at some point if I can and probably chip away at both the 1/72nd scale What a Tanker! tanks and the 15mm Sandbox Skirmish figures, vehicles and terrain, which are still very much on-going projects but also very much side-lined for the moment.
Posted by Jim Jackaman at 09:27