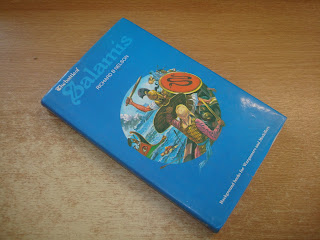 One of the things I'd like to do this year is to write my own set of naval wargaming rules, something that I have wanted to try out for a long time but just haven't got round to scribbling down. The obvious choice for me is a set of ancient naval rules, not because I know anything about the period (at all!) but because it doesn't require anything too complex. As ancient galleys were primarily oar powered, there is little if any need to model sailing and with no gunnery to speak of, the only combat would be by ramming or boarding, give or take the odd special manoeuvre. 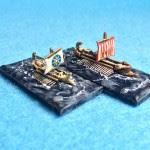 I like hex based games and I like card based turn sequences, so those would need to be incorporated in the system somewhere, along with some element of formation based movement and a bit of 'randomness' for the fog of war to be present. It all sounds a bit like a set of air wargaming rules to be honest, which is something I am familiar with and which can give me a good starting point. The scale of choice is also 1/600th scale, so that I can fit models onto 30mm wide hex bases, so Tumbling Dice is definitely the best option, being cheap and quick to paint as a added bonus. 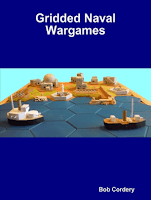 I have been assembling some background reading material as a starting point, with a second hand copy of The Battle of Salamis by Richard Nelson now in the post. I had a copy of this book when I was at school and I remember it having a pretty good set of hex based rules as well as some good detail on the battle itself. I've also been reading the relevant chapter in Paul Hague's Naval Wargaming, in which he has a set of hex based rules called Trireme, which look good apart from having no real initiative or move sequence, making solo play pretty difficult. I've also dipped into Bob Cordery's Gridded Naval Wargames, which is a great source of ideas and concepts from first principles up to workable rules designs.

I'll give this rules project some more slow burning thought over the next few weeks. If you think of anything you would like or expect to see in a set of simple, fast play and most importantly fun ancient naval rules, let me know and I'll see how I can work them into my design?
Posted by Jim Jackaman at 02:03