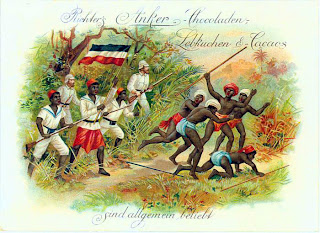 I've had a chance to rummage through the Darkest Africa spares box and found a gunbearer and scout figure but no suitable standard bearer. So, after some thought, I've re-designed the German Colonial Expedition to look like this:

The agile spearmen were destined for my Zanzibari Arab Slavers but will do nicely as allies for the Germans, or at least as bullet magnets / ambush triggers depending upon the scenario and opposition.

I've also ordered one more pack of German East Africa Comapny Askaris to boost their numbers above the baseline six, which should make morale checks less frequent. How many I get to add to the two units depends upon the number in each pack with bolt action rifles rather than flintlocks.