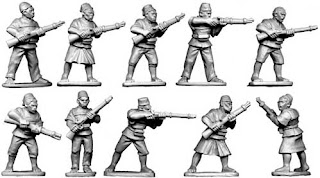 That nice Mr Copplestone delivered the DOAG Askaris this morning (well, not exactly in person but metaphorically speaking).

Having read my mind, Mark included six figures with bolt action rifles and four with flintlocks, allowing me to max out on my two units of regulars for In the Heart of Africa i.e. two units of nine figures each.

This will add another 120 points worth of firepower to my Colonial Expedition, which will be handy if I don't get the gunboat done for whatever reason or as extra opposition for Dave's powerful Royal Navy landing party.

One of the leftover Askari figures might also be a suitable basis for a conversion into a standard bearer, if I don't destroy it in the process.