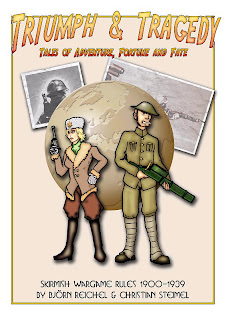 Actually, it's a game I've arranged for early January to try out the T+T rules.

There's a move afoot at the club to find an alternative to Contemptible Little Armies for the Back of Beyond and other skirmish type games. I picked up the rules a while ago and thought they looked interesting especially the card based turn sequence as I'm a big fan of Toofatlardies rules like Bag the Hun, which use a similar mechanism.

So, Jon and I have decided to try the rules out with my Bolsheviks versus his Whites, probably involving the sample scenario in the rulebook or the cattle raid scenario from the download section of the website.

This also got me thinking about a long abandoned project to do some 28mm Freikorps for CLA. I've got some Renegade Late War Germans in a box somewhere for this and, if the rules work out well, I may dig them out and paint up a few. I'd rather use Great War Miniatures figures now but, as I've already got the Renegade ones, I might as well go with them.

I'd only need a dozen or so plus a hero figure and perhaps an HMG or flamethrower, so not much to do really?
Posted by Jim Jackaman at 03:43