The next big thing.. 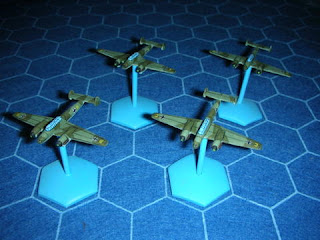 A few weeks ago Mark Cleaver, the chap who runs Raiden Miniatures, sent me an e-mail to ask if my local club, Wessex Wargamers Winchester, would put on a participation game for the main UK shows next year. The game would involve loads of the excellent Raiden 1.285th scale planes to showcase the quality of his models and raise the profile of Raiden, hopefully generating a storm of new sales.

After quite a long process, with lots of different ideas being shot to and fro in the club yahoo group, we've decided on a Battle of Britain scenario set on the 12th August 1940. The game would re-create the day before Adlertag, when a massive formation of Junkers 88's from KG51, escorted by equally large numbers of Me110's from ZG2 and ZG76 plus a small elite grouo of Me109's from JG52, flew down the channel and hit Portsmouth and the Isle of Wight, knocking out the radar station at Ventnor.

The game is now in the prepartion stage, with a shedload of planes on order from Mark for delivery after Xmas and plans well ahead for some great looking terrain using the Kallistra hex system. We've also got an experienced team of rule writers on the case, devising a simple but effective rules system, devised with multiplayer participation in mind.

I'll try to keep our progress (or lack of it) posted here to see how we pull it all together for our first public outing, which should be at Salute in April, assuming everything goes acording to plan?

My job in all of this, apart from working out the scenario and units involved, is to co-ordinate the painting and decalling of 90+ planes, including 24 Junkers 88's that I've volunteered to sort out. Mark is sculpting them now and should have them ready in January, which will give me about a month to turn them round...

Fingers crossed, it'll all go without a hitch (but I'm not holding my breath!)
Posted by Jim Jackaman at 05:51