I Aint Been Shot Mum 3 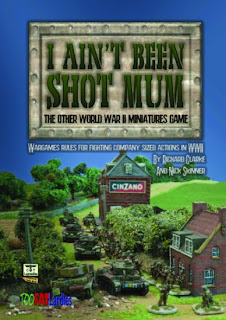 It's my birthday tomorrow and, as an early present from the Ministry of the Interior, I was allowed to buy a brand spanking new copy of IABSM3, complete with a card deck and the little plastic tokens that are used as in game markers. I've had the old set of IABSM on pdf for a few years but somehow never got round to trying it out, mainly due to a lack of figures and opponents.
However, the new version may well get me moving in the right direction, although not in 20mm as I originally intended. An article in the 2011 TFL Christmas Special has got me thinking about the potential of 10mm as a scale for IABSM or perhaps 15mm using some of the figures that I have in the leadpile. In fact, it would work very well for my 10mm French Indochina war project.
As it's flipping freezing in the garage tonight and as I only got home at 8.00pm this evening, I've abandoned plans for painting any figures. I should finish work earlier tomorrow so will aim to get started on the WW2 Italians as soon as I can, with a good drybrush to kick things off!
Posted by Jim Jackaman at 21:44