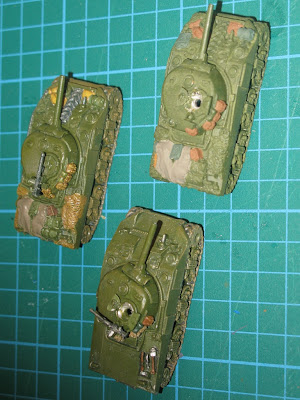 I have some M3 Lee tanks on the way from QRF for the up and coming 15mm project but, after a bit of a rummage in the dusty boxes under the workbench, I found these old Peter Pig M4A2 Shermans which I originally painted up for a long dead project many, many years ago.
It was so long ago that they're actually (really badly) painted in Humbrol enamels (arrghh!). Anyway, once stripped, cleaned and re-assembled, I'm sure they'll be useable as tank support for the 'as yet un-named' project, even though they're not M4A4's, or Sherman V's to be pedantic about it.
I can get away with it as there were some Sherman III equipped units around at the time, although in relatively small numbers. They're nice models either way and look the part with all the extra stowage, applique armour and whatnot that covers the hull and turret.
Posted by Jim Jackaman at 20:54