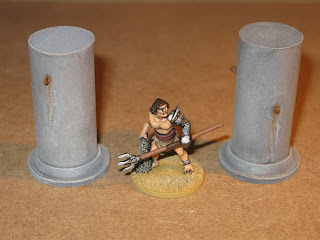 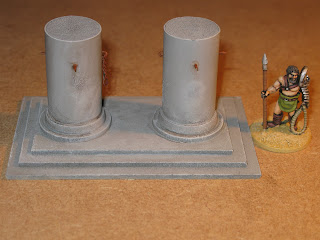 I've been scratchbuilding some 'terrain' for the gladiators today, although the scope for anything substantial is a bit limited, short of a full blown arena. I used some plastic wine bottle corks, citadel bases and mdf circles to make some arena columns, with iron rings made from brass wire.

I also built a pair of columns on a plinth of rectangular mdf bases with the other bits following the same approach. The whole lot was then sprayed in a Humbrol grey, washed in GW Devlan Ink then drybrushed up with Foundry Arctic Grey. A bit of rust and some weathering was added too. 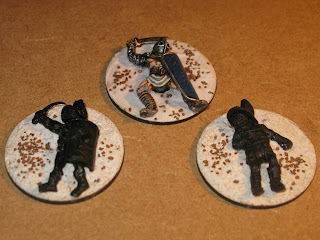 I've also undercoated and based up some obstacles in the form of dead gladiators, two of which are from the Crusader range and the other from EM4. I had to convert two of the figures into casualties by squashing them down and re-positioning the feet but I think they look the part. 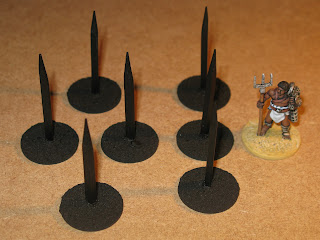 Finally, I made some quick spike things out of bamboo nibble sticks and round mdf bases. I'm not sure what they are exactly but they were simple to make and will help to break up the otherwise flat and featureless arena. I think they're something akin to the six foot posts used to train legionaries in sword technique, only on a slighly larger and 'spikier' scale.

To make time for some more terrain building and to finish off what I've already done, I've decided to scale back the light gladiatiors to six figures instead of twelve, the boxers being consigned to the reserves box along with some of the other unarmed gladiatior figures. This means that I'll still have sufficient figures to make two teams of five gladiators for the game in a couple of weeks.
Posted by Jim Jackaman at 16:46