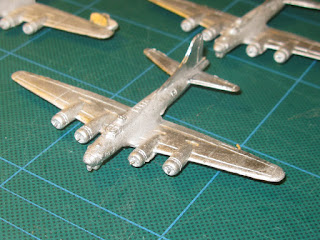 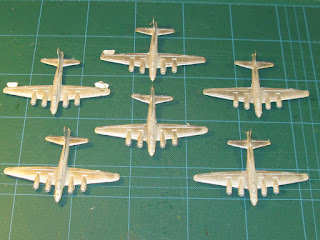 It's been a toss up between the B-26 Marauders and the B-17 Flying Fortresses but I've decided that the focus of my next Bag the Hun 2 game will be a mass attack by late war Luftwaffe fighters on a combat box of B-17G's. The Scotia Collectair B-26 is a nice model but I only have five of them, the sixth having been badly miscast, which I didn't spot until I took a close up look at the wing leading edge. The B-17's are, however, a bit more robust and should clean up nicely, once I've removed all the lumps and bumps. It's a bit of a shame not to use the Marauders, as I've found what could be a really good historical scenario based around a mission to bomb the rail bridge at Mayen on 23rd December 1944. I guess I'll just have to save that one for another time, having just put in an order for some replacement Marauders to make up the numbers.
Posted by Jim Jackaman at 12:30