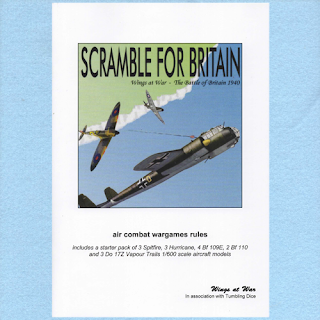 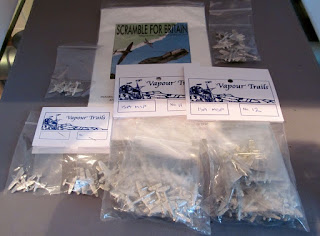 My foray into 1/600th scale naval and aerial wargaming continues with a successful eBay bid on a couple of starter packs of Tumbling Dice aircraft and a (second) copy of the starter set for Scramble for Britain, the Battle of Britain rules in the Wings at War series. This lot put me back about a fiver less than the full asking price, so not a massive saving but still worth it, especially as I already have quite a few packs of German and British aircraft set aside to add to the respective air fleets. This means that I now have more than enough planes and rules to set up a respectable Battle of Britain Wings at War project at some point, as an adjunct to my existing efforts in 1/285th scale using Bag the Hun. Tally Ho!
Posted by Jim Jackaman at 03:32