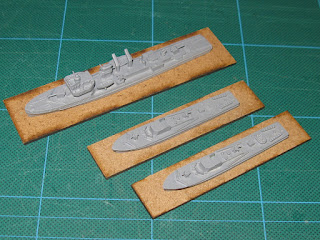 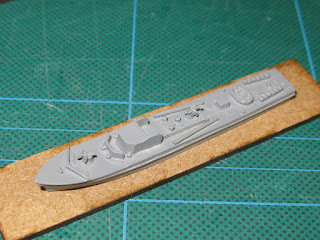 I've assembled and undercoated the last models for the moment including two Raumboote and an M35 class minesweeper. The R boats are the old Skytrex models which I think are supposed to represent the torpedo equipped R301-312 series boats. I decided to turn mine into less heavily armed early model R boats but without removing the torpedo tubes as this was a bit fiddly. I may well cut them off and sand them down before I paint them up.

The M35 class minesweeper was one I assembled a while back but I didn't do a great job of it so have tidied it up and re-undercoated it instead. I'm hoping to actually start painting some of the models I've prepared over the next few weeks but half term is approaching, so I won't be around for much of the rest of the month. I will also be having a crack at another game of Schnell Rules for Schnellboote! when I get the chance.
Posted by Jim Jackaman at 13:01