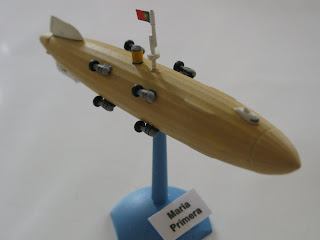 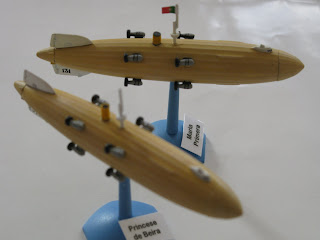 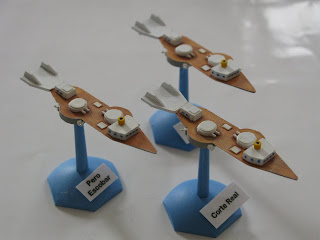 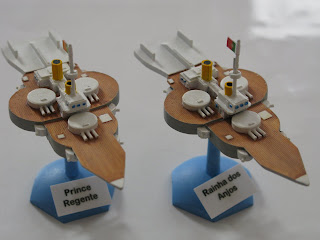 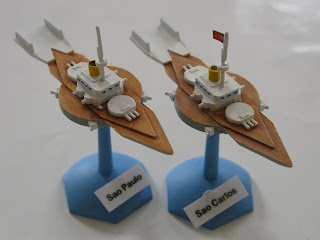 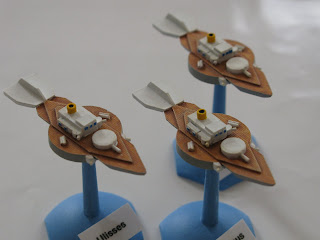 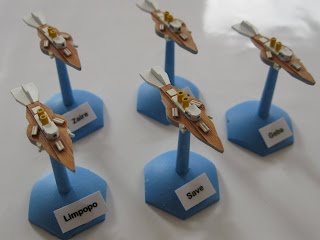 I've played a few games of Aeronef over the last two or three years and have even run a Scramble for Africa campaign at the club which went down quite well. My first eronef fleet was Japanese,but it remains unbased as I originally used blutack to stick them to the flight stands and never got round to basing them properly.


My chosen colonial power for the campaign was Portuguese, so I used a combination of Argentinian and Brazilian nefs because they were really nice models and weren't used by anyone else at the time (the other fleets were British, German, French, Russian, Egyptian and Italian).


I went for a hot climate scheme of grey hulls and white superstructure, with yellow funnels for a contemporary victorian look. They could do with a wash or blacklining of some sort but I couldn't be bothered at the time as I had to get them ready for the campaign in a couple of weeks. The digs were converted from plastic Revell Hindenburg kits by turning them upside down and sticking two lower halves together.


I've also got a small Bolshevik fleet using the Brigade Hungarian aeronefs. It's not complete but I'll post some pictures of what I've got so far later on today.
Posted by Jim Jackaman at 03:03