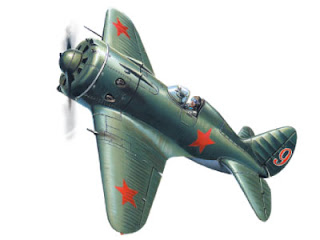 I've been thinking about alternatives to the Battle of Britain for Wings At War and had a flashback to an idea I originally had a couple of years ago.

I thought about doing the Nonomhan Incident in 1/300th scale using Bag The Hun at the time and even got together a selection of aircraft for both but these got sidelined by other things. I also came to the conclusion that the numbers of aircraft involved meant that 1/300th scale wasn't quite right, as I'd only be using squadron strength units at the most for reasons of gameplay and workload.

Today I had the idea of using 1/600th scale with a variant of Scramble For Britain as a basis for a Battle of Khalkin Gol, as the Soviets called it at the time. Nearly all the required aircraft are available from Tumbling Dice and would be easy to paint up, base and organise into relatively large squadron sized units.

I'd have to work out a set of objectives, missions and some special rules to fit the particular conflict but a lot of the rest could just be lifted or adapted from the existing Wings At War system. The terrain would also be very easy to do!

I'm quite interested in working this out if I can find the thinking time over Easter.
Posted by Jim Jackaman at 07:13