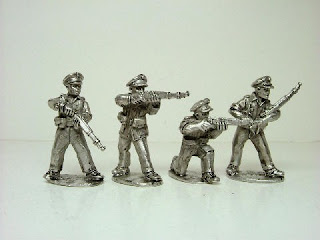 I had another look at the Empress Assault Guards next to the Musketeer BUF figures yesterday. Although they are an excellent match in style and size, not a surprise as they were sculpted by the same bloke, they are quite different in terms of their uniforms and webbing. So, I'm going to use them as a seperate militia alongside the BUF legion figures rather than mixing them in. I am going to use a couple of the command figures with the BUF Legion platoon but I have about ten of the Assaultos left over to form a section of their own.

I was then faced with the challenge of explaining their unorthadox outfits, which consist of 'mono' boilersuits and peaked caps. At first I thought they could be a crew for an armoured train as they look a bit like railway drivers and firemen. The only problem with that is I will need to build one. I have some Teamsters toy engines and carriages for this, orignally destined for the Back of Beyond, but it would be quite a bit of work. In the sourcebook the railwaymen are also largely leftist so less than keen to drive trains around for the BUF.

My second idea was to make them a militia unit of bus drivers and conductors, which would operate as the transport element of my BUF flying column. I quite like this option as I could scratchbuild or convert an improvised armoured bus for them to drive around or just get hold of the big scary Somua armoured lorry from Empress. The figures look like they might be bus crew in their caps and overalls and it would be easy to include some BUF armbands to give them a bit of identity.