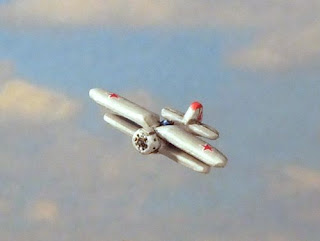 Right, had a quick look at the Tumbling Dice and O8 ranges and did some background refresher googling to work out what would work for the Nomonhan Incident. It looks like most of what's needed is already there, both for the Soviets and the Japanese.

Some were also equipped with air to ground / air to air rockets and these are also available as variants (ISA 365a / 367a).

There's no I-153 but these only appeared at the end of the conflict. Luckily, O8 do a very nice I-153 so I can use them alongside the TD aircraft to fill the gap.

Bombers were the SB2 (ISA377) but the TB3 (ISA379) was also used for night bombing towards the end of the war.

For reconaissance and liason the R5 was widely employed but it isn't in the current TD range. I could use the DH4 from the WW1 (ISA14) range as a substitute with a bit of filing to the cowling but it isn't quite right.

The Ki 15 Babs (ISA 410) is probably better empoyed as a scout / reconnaisance aircraft, as these were also used a lot during the conflict.

There was one squadron of heavy bombers which probably were Fiat BR20's (ISA465) but there may also have been Ki 21 Sally's (ISA416).

Overall, just about everything is available in the Tumbling Dice range, including some useful ground targets in the ISL range too. I need to look at the O8 Russian stuff too, as I'm sure I can find some suitable early war things there that could be used as objectives or targets for strafing.