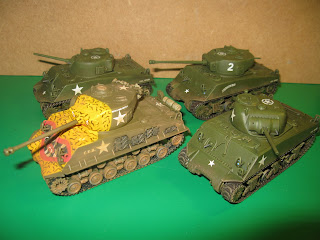 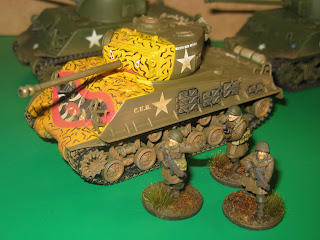 The Corgi diecast M4A3E8 that I found on eBay a few weeks ago has arrived and it's a cracker! Here it is next to my existing Shermans that I've repainted for use with my Artizan US infantry platoon. It won't be difficult to refurbish the Easy Eight to match up with my other tanks, with the potential for a Bolt Action Tank War game on the horizon. The new Iron Cross rules also seem to feature relatively large numbers of AFV's, at least in the game reviews that I've been reading, so I'm sure I'll be able to make use of the Shermans for that too. You can't beat a bit of armoured punch!
Posted by Jim Jackaman at 10:01