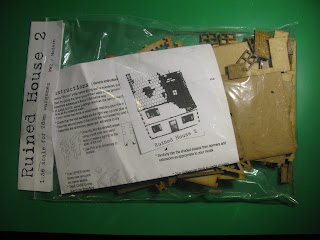 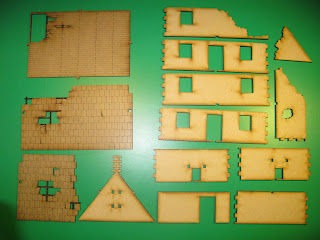 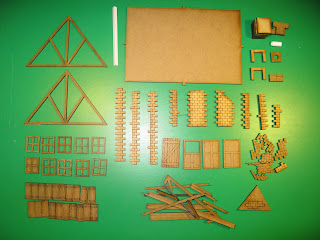 I ordered a 28mm laser cut ruined house kit from Charlie Foxtrot Models at the weekend and it arrived today. I haven't assembled any of this range before, although I do remember hearing about it somewhere and did have a nice chat with the designer at Colours back in September, after being gobsmacked by the fantastic V1 launch ramp model that he had on display.
I'm really impressed by this kit too, which comes bagged with a set of instructions and loads of mdf bits. The main walls, roof and floor sections are cut from 3mm mdf, so really sturdy and able to take some serious punishment. The other components include the usual windows, doors, shutters, chimney parts and roof beams together with a whole load of rubble and wreckage to sprinkle about.
There are a whole load of other kits available from the Charlie Foxtrot web shop thing including some VBCW stuff, some really nice Eastern Front rural buildings and a good selection of Normandy town buildings too. I particularly like the resin rubble pieces that are designed to fit around the ruined houses, so I've ordered a pack and a couple more of the wrecked houses for my Bolt Action project.
It turns out that the designer lives only fifteen minutes from my parents house in Cornwall as well, so it's good to support a local company with some really nice products. If I can think of a valid use for a V1 launch ramp in 28mm and a 28mm pontoon bridge just like the old 1/76th scale Airfix kit, I'll be after those too!
http://www.charliefoxtrotmodels.com/
Posted by Jim Jackaman at 13:15