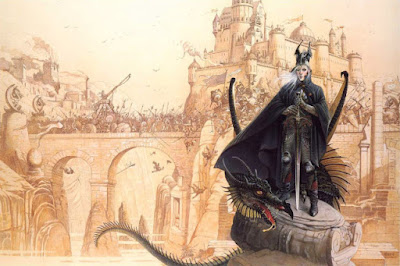 There's a definite 80's look and feel to Dragon Rampant including some excellent art work that reminds me a lot of old editions of White Dwarf and the covers of the Sword and Sorcery paperbacks that I read when I was a kid. I don't know who the artist is but the illustrations are very much in a Chris Achilleos style...brilliant!


This got me thinking about a not-elf army for Dragon Rampant that I could assemble using the Mantic Elves that I bought cheap a couple of years ago, in a futile attempt to get my eldest into wargaming. I think they would make a splendid Melnibonean army, complete with an albino sword wielding sourcerous anti-hero.


I have enough figures for a unit of heavy cavalry, a couple of units of heavy spears and a unit of archers, which is plenty to start with and would fill out the twenty four points required for a warband. I can also include a couple of reduced size units including characters like Elric, Yrkoon or Dyvim Tvar, the latter as a heroic champion.


I might even stretch to a dragon....although it will probably be a bendy plastic toy one in keeping with the budget! Either that or they'll just be generic high elves, perhaps even ice elves so that I can use them with my new snow terrain cloth and scenery. I quite like the idea of an ice themed army and it would be an interesting painting project, with lots of light blue washes and highlights.

In an ideal world I'd splash out on some of the Nick Lund dwarves, orcs and chaos warriors from Forlorn Games, which would be very nostalgic and lots of fun to paint up, but the plastic option is far less expensive and easier to put together in the ever decreasing spare time that I don't have for the hobby.
Posted by Jim Jackaman at 12:33