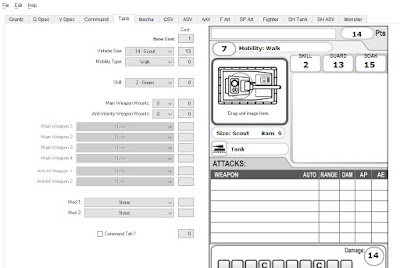 I've achieved nothing this half term in terms of wargaming having been away in Cornwall for most of the week. Nevertheless, I have been sketching out the parameters of the 15mm sci-fi project, with three possible forces on the cards. The one I'm focussing on to start with will be built around Brigade Models mercenary AFV's and GZG hover APC's, alongside GZG Colonial Defence Force (CDF) figures. I haven't decided yet if they will be destined for a desert, jungle or  tundra environment, as I've yet to have a close look at the figures, so the camouflage scheme for the tanks and troops is not tied down. 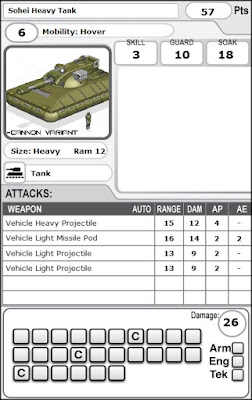 I have also started to work out an orbat for the as yet un-named force using the very nifty Barracks Application, which allows you to create customised unit cards for all of the units in the game including infantry, specialists, tanks, support vehicles and so on. It's really easy to use and has a simple drop down interface from which you select the various options, before it does all the number crunching for you. The resulting data sheet can then be printed out, after you've uploaded a picture of your particular model or figure stand. I've been playing around and have created one for the Brigade Models Sohei heavy hover tank...very quick and very simple.

A great help and all for the cost of a pint.
Posted by Jim Jackaman at 14:57