I had a great idea this morning, which is a rarity at the best of times. I was thinking about potential uses for the red planet terrain cloth that I bought yesterday and realised that I have a project that would be a perfect fit. This is my 6mm Iron Cow sci-fi project that I started on a few years ago but then drifted away from, after completing a British ONESS armoured brigade of tanks, SPG's, AAA and APC's. The reason that it fizzled out was that I couldn't find an opposing force that I liked from the Brigade Models range, although the Chinese were a possible option.

Now, however, there is a superb selection of so-called mercenary AFV's including a very cool Sohei heavy tank with several variants. I already have some of the 15mm version of this model and I love its retro M60 styling complete with turret mounted missile pods. So, I thought it would be great to put together a force to go up against my completed ONESS armoured brigade, using the mercenary range of models to build a generic opposing army. These will be based on the same Renedra brown plastic bases that I used for the ONESS units, which also should be a good match for the red planet terrain. 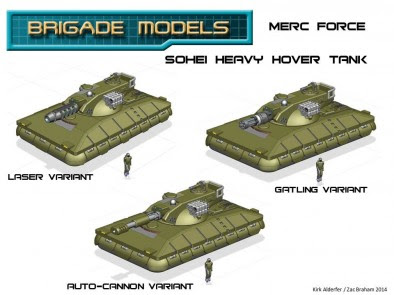 I've ordered a couple of the company packs and some extra bits and will get started at some point in the next few months. I planned (and still intend) to do a 15mm sci-fi project this year, although it was going to be later and using my tundra cloth for a winter theme, but I might as well kill two birds with one stone and finish off the 6mm opposition for Iron Cow, or whatever set of 6mm sci-fi rules I eventually end up using. I wonder if I have some other rules that would work for this...I'll have to have a look?
Posted by Jim Jackaman at 18:31