A couple of years ago I bought a shed load of 15mm Aliens M577 APC's from Anteonciti's Workshop. These are no longer available but, as I have a full company worth of all of the variants, that's not a problem (they had a special offer...what can I say?). The models are really very good and will be used alongside GZG NAC infantry, which are as close as I could get to Colonial Marines.


Since then I've been searching for a decent tank model to use alongside the APC's but without much luck. I didn't like the M578 APC variant with its anti-tank rail gun style mounting otherwise I would have just used that, so instead I bought a trio of Rhino wheeled tanks from Brigade  Miniatures which look a lot like the M577's and match up very well. 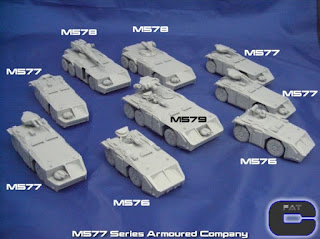 However, I still really wanted a proper tracked heavy tank to stand in for the M22 Jackson or M40 Ridgeway, which feature in the Aliens Colonial Marines manual. These are both unusual designs with the turret mounted toward the rear of the hull, so it's been hard to find a matching or even vaguely similar model to use.

In the end, I've decided to go for the Warmonger heavy tank from Critical Mass Games, although it doesn't look at all like the designs in the book. It's a much more angular design with a conventional turret mounting but I think it will look good next to the M577's, which are similar in their general appearance.

They also are available as a discounted platoon pack of three, which should keep the cost down a bit (as they're not cheap to start with!)
Posted by Jim Jackaman at 11:46