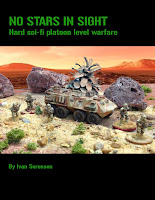 It's been a very heavy start to the year work wise which has meant that wargaming has been pushed even further to the margins of my spare time. This has been frustrating but not entirely unexpected so I've decided to re-think my plans for this year in a fairly radical way. I now know that my opportunity to get involved with games at the club is very much limited, so much so that I've only had one game this year so far. As a result, I'm rapidly falling out of the loop as far as club games are concerned, meaning that projects tied down to other players at the club are really a bit of a non-starter.

So, I'm having to scale back and re-think what I'm doing this year, with a focus much more on my own solo projects that I can tinker away with in my own time, whenever I get the chance. I've decided to focus almost exclusively on 15mm Sci-Fi in 2016, which was one of the areas that I set out to tackle in the New Year. This has the advantage of being very scaleable and has no strings attached in terms of the rules that I use, the setting or the miniatures. It's also very much an 'imaginations' project and one which I will enjoy. It also means I can indulge my mdf habit with some new terrain!
Posted by Jim Jackaman at 06:32